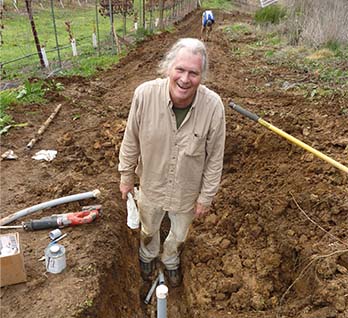 Robert Nuese is an officer of Sphere Solar Electric and the California affiliate of Sphere Solar Energy. He is a licensed general and electrical contractor with more than 35 years’ experience in building construction. Originally a surfer from San Diego, he’s lived in Sonoma County California for 44 years and holds a degree in Mathematics. For more than 15 years he worked in essentially every building trade on new construction and remodeling. His impetus for changing over to solar installation was partly to learn something new, and largely because of a clear understanding that if we don’t stop using fossil fuels quickly, our children and grandchildren will suffer. For the last 19 years, his sole focus has been the design, installation, and maintenance of solar electric systems. Before joining Sphere, he operated his own business, Healdsburg Solar Electric. As the owner of Healdsburg Solar, Robert built 60 systems, designed, obtained the permits, and did the bulk of every stage of the work. One of these projects (the largest PV system in Sebastopol) includes arrays on 13 buildings. He’s also assisted other installers with design and drew the electrical diagrams for dozens of other systems. Most of the systems he’s built are grid inter-tied. Many include battery storage and several have backup generators while five have the ability to track the sun. When not building solar systems, Robert likes to walk, visit with friends, write, make music, and especially to be with the love of his life, Heidi.

What Our Clients Think

Sphere Solar was outstanding throughout the entire project to install a solar system for my single-family home. The initial estimate of my energy needs was spot on and Edwin and team were quick to respond to my follow on questions until settled on a configuration. Installation was seamless, clean and professional. My first electric bill since installation was $0 and had credits accumulated with the power company. I highly recommend Sphere

Working with Sphere was amazing! Eddie was super helpful getting a plan in place and making sure we had everything we needed for the project to fit our house. The crew was super attentive, clean and professional the whole way through. We never has any worries about safety or effectiveness. Top quality materials the whole way through. The electrical inspector even commented on how good the install was!

I had a very positive experience working with Sphere Solar.
Regarding the contract they did what they said they would do for the price quoted. The work appeared to me to be quality and the solar array has been functioning with no issues.
I enjoyed working with the Solar office staff of Mia and Maria, they were helpful, responsive, and friendly. I also enjoyed working with the installation crew, especially electrician Peter who was not bothered by my many questions.
My impression is that Sphere Solar has a higher goal than just making a profit, but rather doing the right thing by providing a service of installing solar to the benefit of our home planet.

Once they got going, it was very smooth, very professional, with predictable schedule. The panels went up quickly, in about 2-1/2 days, and the wiring etc was done in another day. PSE took their time to approve everything, but that's not Sphere's problem. The job looks nice, and I enjoy watching the panels' output on my laptop everyday! With an 8kW panel, I have seen consistent 40+ kWh of energy generation on sunny days in April, 2021. I highly recommend Sphere.

Wonderful experience, the crew was friendly, professional and efficient. We love our solar panels and highly recommend this company!

Our solar experience with Sphere was superb! From the beginning to the end, the Sphere crew went above and beyond to make sure our system was installed in a timely manner. They kept us updated and cleaned the job site each day. Making sure we were happy was their number one concern. If you are considering solar, I highly recommend Shere Solar!

Great communication about the process and the product. Installation was quick and easy. Highly recommend!

I contacted Edwin about getting solar and back-up batteries installed on our Kirkland house. We went with an Enphase 10.2kW PV system backed up by two Enphase batteries providing 21 kWh of capacity. The team at Sphere were very responsive to our questions, and everything from bid to install to final inspection went smoothly. I really appreciated the expertise and customer support from Sphere. I highly recommend them to anyone who wants to make the move to solar!

Starting with the initial consultation, Edwin and team did a wonderful job guiding us through the entire process. Even though my 110 year old home presented some unique challenges, they were able to adjust mid project (and no additional cost to me) and delivered an excellent system.

...The service was awesome and flawless. The crews showed up on time. The materials showed up on time. The crew did inventory of all the equipment and when it all checked out began installing. The crew was more than willing to explain what each piece did and what the next steps were... After the panels were installed, and the system connected, they showed me that the panels were all working via the mobile app. I could also see the meter was spinning in reverse! The city inspection (2 of them) had no corrections or warnings --- first time pass!...All of the install was done during Covid conditions and everyone followed the safety rules.. I've had several neighbors inquire and I have nothing but great things to say about my experience.
Get a Free Quote